If you missed the other posts in this series, you can read part 1 here, part 2 here, part 3 here, and part 4 here. 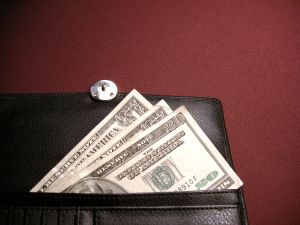 This isn't the right time to tell you everything we learned from The Total Money Makeover, but I will tell you about one change that we made.  We decided to make the switch to a cash budget.  We weren't really sure it would do much good because we were always so careful about how we spent our money.  Plus, when we put everything on a credit card, we earned points that could be redeemed for cash when they had been built up enough.

But, I had seen several people online talking about how well it worked for them, and there were a number of real-life examples in the book as well.  We decided it couldn't hurt anything to give it a try.

When I first made the switch off of coupons, I was spending about the same amount of money by shopping at ALDI; I just did not have a pantry fully stocked with the newest products anymore.  I was actually spending less money if you factor in the gas and time that I spent shopping at multiple stores with my coupons.

When we switched to the cash budget, the grocery bill dropped even lower.    It was a challenge to me to see how much leftover cash I could have at the end of the month, and I began to menu plan every week, making sure I was only buying what was absolutely necessary for the meals I had planned.  I  ruthlessly scrutinized each item that went into the cart, trying to determine if there was any way we could make do without it.  Every dollar's worth that I put back on the shelf added up surprisingly at the end of the month, and I would sometimes have a hundred dollars left over!  (Have you tried a cash budget yet?  You might be surprised what it will do for you even if you're already very disciplined with your money!)

Things were going extremely well.  Due to the lack of free-with-coupon convenience foods, we were eating healthier meals.  Our grocery budget was lower than it had been in a long time.  I was ready to settle into this well-balanced plan for the long haul.

Then, we hit another bump in the road…

Natural Makeup That Works For Me