If you missed it, you can read part 1 here and part 2 here. 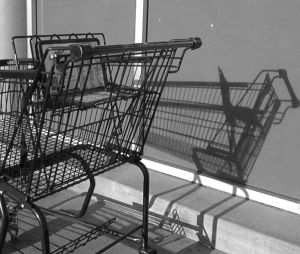 I'll spare you the lengthy details, but a couple years after our marriage, I discovered the world of coupons.  I'm not talking about getting a dollar off something we normally bought.  I'm talking about checking out with a whole cart full of groceries and having them owe me money at the end.  I was good at it, and it was fun.

At that point we didn't have any strict budget for groceries other than to buy only what we needed and not to spend any more money than absolutely necessary.  Before I started using coupons we basically spent the same amount every month because I would buy the same things for the same prices.  Sometimes we'd spend less if I'd managed to find meat or produce marked down because of an impending expiration date.

When I started couponing so heavily, we still didn't have a strict grocery budget.  I would just buy whatever was free or close to free with coupons and fill in the gaps with meat and vegetables.

Our pantry was filled to the brim.  My husband had to build extra shelves – twice.  We had boxes and boxes of cereal, shelves loaded with canned vegetables and soups, boxed potatoes, baking mixes, condiments – you name it and I had it.  And I had paid almost nothing for it.

I tried to be careful.  I tried to buy only the “healthiest” stuff.  We ate cereal for breakfast, but I tried to get the kinds with less sugar.  We ate granola bars for snacks as opposed to cookies.  When I got Hamburger Helper meals for free, I would get them only for the purpose of using the pasta, and I would throw away the packages of chemicalized sauces.

Occasionally the temptation to enjoy convenience crept in, and I would allow myself to bring home cookies, chips, and soda when I got them free.  But we still tried to keep the “junk food” to a minimum and only use it as a special treat.

But the fact of the matter is that processed food is…well…processed.  It doesn't matter how many claims on the box say that it's healthy or all-natural.  If it comes in a box or a can, 90% of the time it contains ingredients that were not meant for human consumption.  At best, it doesn't contain any real nutrition.  Even if harmful ingredients are not added to the food, the process by which it must be preserved and packaged to withstand a long shelf life at the store renders it nearly void of any nutrients.

Our trend of consuming free-with-coupons food continued for about 3 years.  Cooking was easy because I always had a pantry full of food from which to choose.  I could open a few boxes and cans, stir them together, and have a meal ready very quickly.  But shopping was another story.  I grew tired of having to resist the temptation to get the free cookies and chips.  I grew tired of not really knowing what my food was made out of, but eating it anyway because it was helping our grocery budget.

One week I brought home 40 (!) boxes of Pop-tarts, not because we intended to eat them, but because they had paid me to buy them, and I was using the overage to get other things for which there are no coupons like milk, meat, and vegetables.

I should have immediately gotten rid of them, but I stuck them in the pantry to deal with them later.  (You know all about my propensity to do that if you've been reading here for any length of time!)

Eventually we opened some of them up when we were hungry and needed something in a hurry.

I knew something had to change…

Natural Makeup That Works For Me