The Unforeseen Reason Your Child is Rebellious | Imperfect Homemaker

The Unforeseen Reason Your Child is Rebellious

“What are you doing?” I asked my son.

I saw the door of my husband's shed hanging open and smelled spray paint fumes, so I was little nervous to find out what was going on.

“Were you using Daddy's spray paint?”

“Are you allowed in Daddy's shed?”

“No,” he answered as he lowered his eyes.

“Do you think you should be using spray paint without permission?”

“Well, you need to go sit on the porch. You may not play right now if you're going to be using Daddy's things without permission.”

We both sat on the porch, just talking about whatever happened to strike my son's fancy at the moment. After I while I told him he could go back and play, reminding him to stay out of daddy's shed.

He enjoyed the rest of the afternoon playing and he stayed out of daddy's shed.

No drama.  Just a mom remembering that her kid is…well…a curious kid and a son listening to his mother's reminder that he needs to follow instructions.

THE OTHER SIDE OF THE STORY

BUT.  Let me be totally honest here, even though it's going to make me look really bad.

There was a time when my children were younger that I would have handled that situation MUCH differently.

Here's how it could have gone:

“What do you think you are doing, young man?” I asked with my hands on my hips and my eyes glaring a hole straight through my son's body. “Were you messing with spray paint? You were! Son, you know better than that! You know good and well you are not allowed in daddy's shed. And furthermore, if you WERE allowed in Daddy's shed, you certainly wouldn't be allowed to be using spray paint. Why are you messing with stuff you know good and well you shouldn't be touching? You are done. D-O-N-E, done! Get in the house. If you can't play out here the way you're supposed to you're not going to play out here at all.”

After I caught my breath after that tirade, I would have seen him into the house, a few more words of rebuke leaving my mouth as we went.

And here's the sad thing. I would have thought I was doing what I needed to do to help my son turn out right.

“He's so rebellious!” I would have thought to myself. “He KNOWS not to go in the shed and he did it anyway! He's GOT to learn to do right! I hate having to be so strict with him, but he's got to learn!”

Now, don't get me wrong. Sometimes we do have to lay down the law and not budge in our stance. I'm not saying that we should let our kids get away with disobedience and there not be any consequences.

But I don't think that being so hard nosed about every little incident is the right way to lead our children. 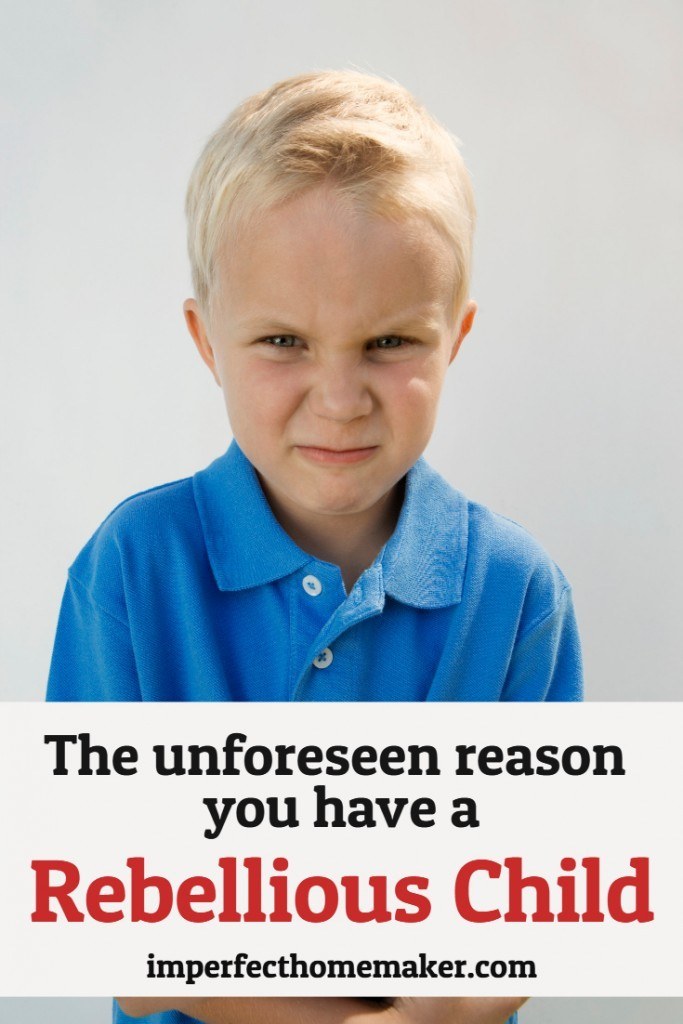 I think we can actually create rebellion in our children that wasn't there to begin with. We tell them by our reactions to their childishness that they are rebellious. If we make everything into head-butting battle, they're going to butt heads back!

I wrote about this concept in What I'm Learning about Child Training from an Olive Tree.

Here's what I wrote:

“Extensive pruning…can actually do more harm than good to a young olive tree. One olive gardening manual warns that “A determination to form the perfect shape by excessive pruning will weaken the young tree and stunt its growth for a number of years.” For this reason, olive growers do not do much pruning at all for the first 4 or 5 years of a tree's life. The only shoots that should be eliminated are those that compromise the definitive shape of the plant.

Olive tree lesson: Nitpicking at my children is only going to discourage them and make them feel like it's pointless to even try. The only thing I should be removing from my children's lives are those things that are actually going to point them in the wrong direction.

Do you discipline harshly for childish things like forgetting to put clothes in the hamper or make their bed? Yes, they need to do those things out of obedience, but sometimes children genuinely forget these things and aren't being purposely rebellious. Gentle reminders will do more good than giving them the 3rd degree for every minor offense.”

I understand why a parent will bring the hand of judgment down swiftly. We want our kids to turn out right, so we make sure nothing slips by! We see so many parents looking the other way when their children disobey and we don't want to be like that, so we are dead-set to lay down the law every single time they commit an offense.

But that mentality leaves absolutely no room for grace. They are imperfect human beings (just like their parents, by the way.) They forget things they've been told. Their childish curiosity overrides their sense of good judgment. And yes, sometimes they even consciously choose to sin. But I'm not so sure that a conscious choice to sin is the same as rebellion. How do your children respond to a gentle correction? If they put their hands on their hips, look you straight in the eye, and defiantly say, “No. I'm not doing it,” then yes, that is rebellion. But if they realize the error of their ways and are repentant about whatever it is they did, then committing the offense doesn't actually mean they're rebellious.  It just means they're a sinner.

Don't set up your parenting goal to be perfect behavior out of your child. Perfection is impossible, and trying to attain it will only frustrate both you and your child.

Instead your goal should be to see a tender heart in your child, willing to listen to correction and right themselves when they've gone astray. You want your child to be able to sit down with you and make a plan to overcome their character flaws. Do you think they will be likely to have a tender heart and be willing to work with you when you always seem to be working against them?

Imagine you've made an honest mistake at work. If the boss confronts you about it with his hands on his hips, glaring a hole through you, does it really make you want to listen to correction with a tender heart? No, it makes you want to do the exact opposite of what he says. But if he comes to you and calmly says, “Hey, I noticed you forgot to ____. Do you think we could talk about figuring out a better system so you don't forget in the future?” then you are much more likely not to get defensive and butt heads with his correction.

Swift, harsh judgment created an attitude of rebellion, while gentleness and understanding produced the desired result.

Likewise with our children, swift and harsh judgment will create an attitude of rebellion, while gentleness and understanding will produce the desired result (a tender heart, willing to heed correction.)

Again, I want to be careful here not to seem like I'm advocating NO discipline. There surely is a time and a place for it. But let's be careful not to create rebellious children by expecting perfection.

In closing, these are the two ideas I hope you'll take away from this article:

1. Change your goal from perfect behavior out of your children to instead an attitude of willingness to heed instruction and correction.
2. Don't be so swift to bring down harsh judgment for their mistakes. Your demeanor can make the difference between their willingness to work with you or to butt heads against you.

This post is part of the Parenting with Gentleness series.

The Morning Routine for Kids that Changed Our Days

10 Scriptural Ways to Pray for the Father of Your Children