We have already seen in part one of this series that Love & Respect misuses scripture by leading the readers to believe that the author’s theory about men’s and women’s deepest needs is God’s unchanging revelation. (Read that post here.)

In this article we will take a look at some of the other ways that Love & Respect misuses scripture. 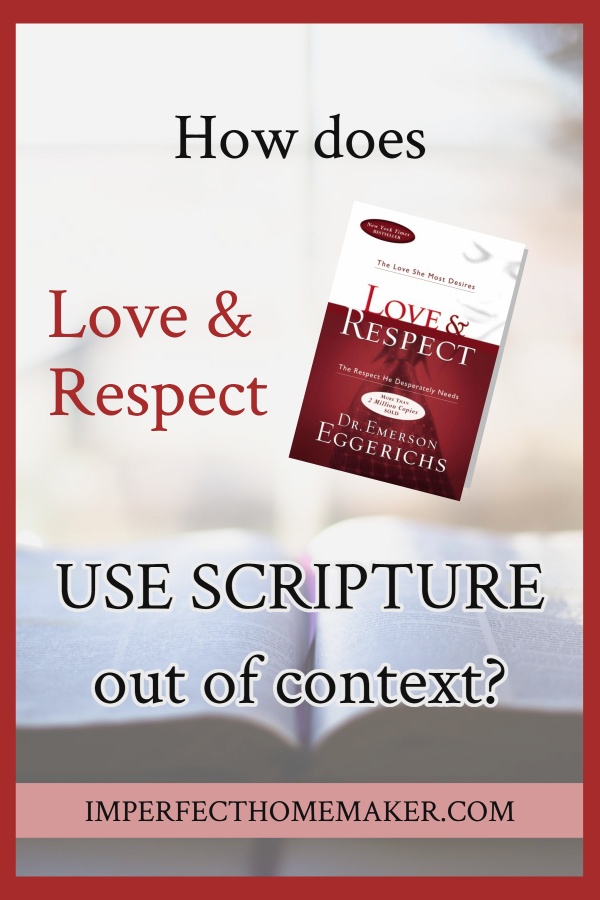 Giving the Benefit of the Doubt

Truly, I could nitpick all day at some of the “little” ways that the author uses scripture out of context to prove a point, but I do not feel that it is worth our time to examine every single one.

For one thing, I want to give the benefit of the doubt. Some of these instances of taking scripture out of context seem innocuous enough, and perhaps they were not purposely used to prove an extra-biblical point.

I have not bothered to include any of these as I do not feel it necessary to split hairs about every little thing.

Other examples, though they may seem harmless on the surface, are more problematic when one takes a closer look.

Take this section for instance:

Knowing that the author takes liberties with declaring his own ideas as Biblical truth made me curious to look at this closer too.

Along with his theory that men’s primary need is respect and women’s is love, he presents supporting theories throughout the book about other ways that men and women are different. God made males and females, and I believe he created them distinct from each other on purpose. But the author takes this idea to an extreme and lays out intricate descriptions of how all men and all women are wired, and quotes scripture verses to support these descriptions. The understanding is that when a wife learns these unquestionable truths about how her husband is wired and acts accordingly, this will make him feel respected. And when a husband treats his wife according to how she is wired she will feel loved.

Now, is it important for husbands and wives to know what makes their spouse tick? Will they be much less likely to unintentionally offend if they know the other might interpret what they say differently than they intend it to mean.

But instead of teaching spouses to learn to appreciate each other’s individual differences, the author of Love & Respect expends a great deal of effort to prove very specific things that all men and all women need, and lays out specific male/female formulas they must follow in order for their spouse to feel understood. 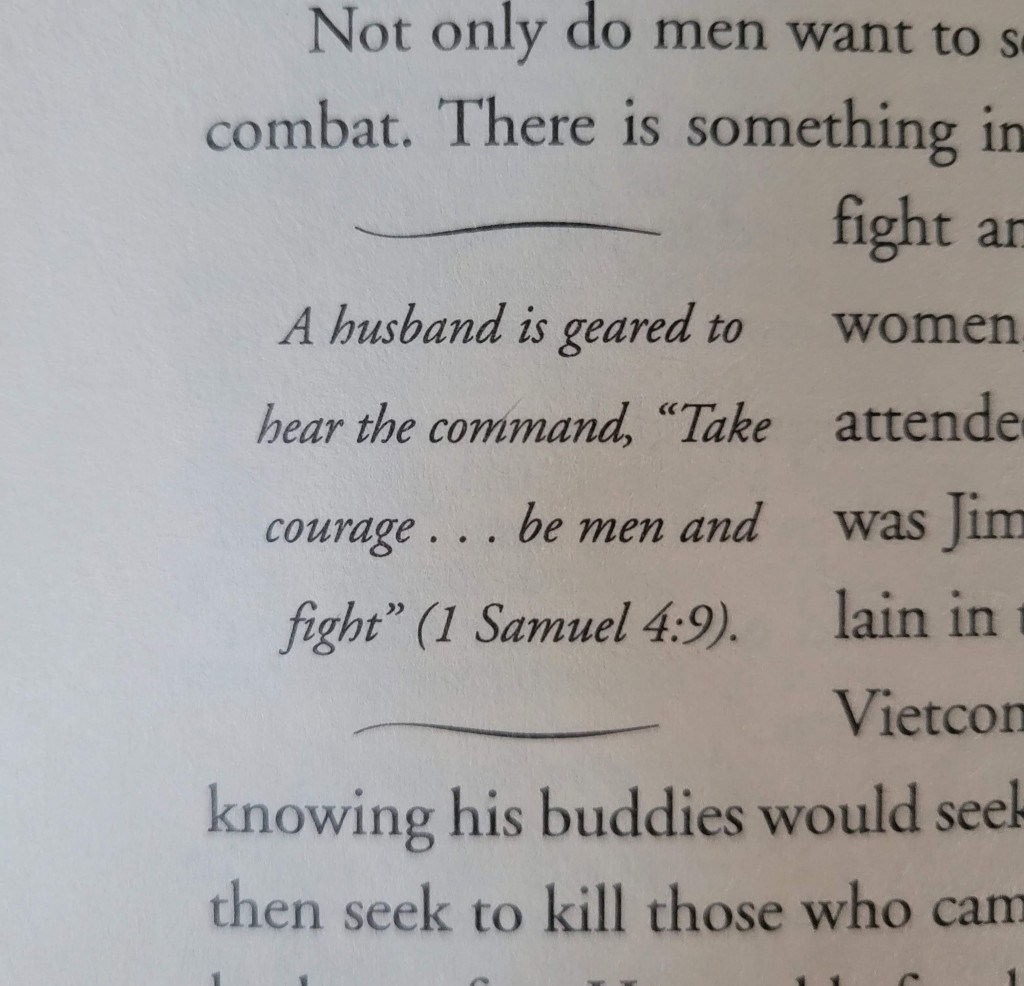 My objection to this part about men being geared to fight is not so much about debating whether being suited for combat is a male/female difference. My objection has a whole lot more to do with the context of the entire book in which rigid gender needs are “proven” from out-of-context scripture verses.

Let’s take a closer look at I Samuel 4:9. In this passage, the Philistine army had battled and defeated the Israelite army. The Israelites determined that their best course of action was to bring the ark of the covenant to their encampment. When the Philistines realized that the ark had been brought to the Israelite army, they became afraid because they believed God himself had come into the Israelite’s camp. They knew that the God of the Israelites was powerful enough to defeat them. In the midst of their fear they said to one another that they must be strong like men and fight, lest they become servants to the Hebrews.

This account of a battle between the Philistines and the Israelites has nothing to do with proving that men are “geared” to fight in combat. But this type of proof-texting occurs frequently throughout the book, and if one does not take the time to look up each scripture verse in its context, one will take the contents of the book as Biblical truth. But placing scripture references in parentheses next to a statement does not mean it is Biblical truth.

The previous example is just one of many where the author misuses scripture by trying to extract something in order to assign labels to each gender.
Without these fixed gender labels regarding what each gender’s deepest needs are and how each gender views the world, the book falls apart.

As I noted in the article about Love & Respect equating theory with scripture, it is not wrong for an author to present his theories. He could have even presented his gender labels as “many women need…” or  “a lot of men feel that…” and he would not have been dishonest.

But to misuse scripture in order to present these gender labels as gospel truth, and to form an entire one-size-fits-all formula around them is misleading at best.

He does not provide any doubt that this strict presentation of gender labels is purposeful. Statements like these appear throughout the book:

“Paul is clearly saying that wives need love and husbands need respect” (p. 15).
“Peter is definitely talking about unconditional respect” (p. 18).
“To speak his language, remember: ‘the wife must respect her husband’ (Ephesians 5:33 NIV)” (p. 66).
“Ephesians 5:33 reveals that a wife needs love and a husband needs respect, and when those needs are unmet each spouse reacts at some level” (chapter one endnotes).

As yet another example of how the author tries to proof-text men and women into very specific boxes, he goes on to use I Peter 3 to construct an entire section about pink and blue sunglasses, meaning the different ways in which men and women see the world (p. 32).

But First Peter 3 has nothing to do with pink and blue sunglasses. If he would like to try to help husbands and wives understand that their partner may be looking at something from a different perspective than they are, he should feel free to do so, but to construct this advice around an out-of-context verse is careless and unnecessary.

The point of I Peter 3:7 is not at all to point out that men and women wear blue and pink glasses, respectively. It’s a command to men to honor their vulnerable wives. While there are some generalities that apply to most men or women, every individual sees things differently. If two people of the same sex are living together as roommates, there will occasionally be conflict between them because they will not always see eye to eye. This is not a unique problem only between males and females, and the answer to interpersonal conflict is much more complex than using  formulas of what “all males” or “all females” need.

Presenting these gender-based formulas as Biblical does a disservice to couples because it leads them to believe that they are guaranteed to work. It is unfair for an author to lead wives to believe that it is a Biblical guarantee that men “need to feel respected even more than to feel loved” and that “respect is the key to motivating a husband” (p. 49-50) when it is merely his theory and not actually a guarantee.

Wives Ask to Be Unloved?

Here is another concept this author teaches that he has extracted from a verse out of context. Let’s take a closer look at what this verse is about.

In Esther chapter 1, queen Vashti refuses the king’s command to come show off her beauty to the royal court. The king became angry and asked his advisors what should be done to Vashti. The advisors told him that there needed to be repercussions for Vashti’s refusal of the king’s command; otherwise all the women will hear about what the queen has done. Then they won't respect their husbands” (Esther 1:17 NIRV).

This passage has absolutely nothing to do with wives “virtually asking to be unloved!”

To even imply that if a wife is unloved by her husband it is because she “asked for it” is at best unfair and in many scenarios dangerous. 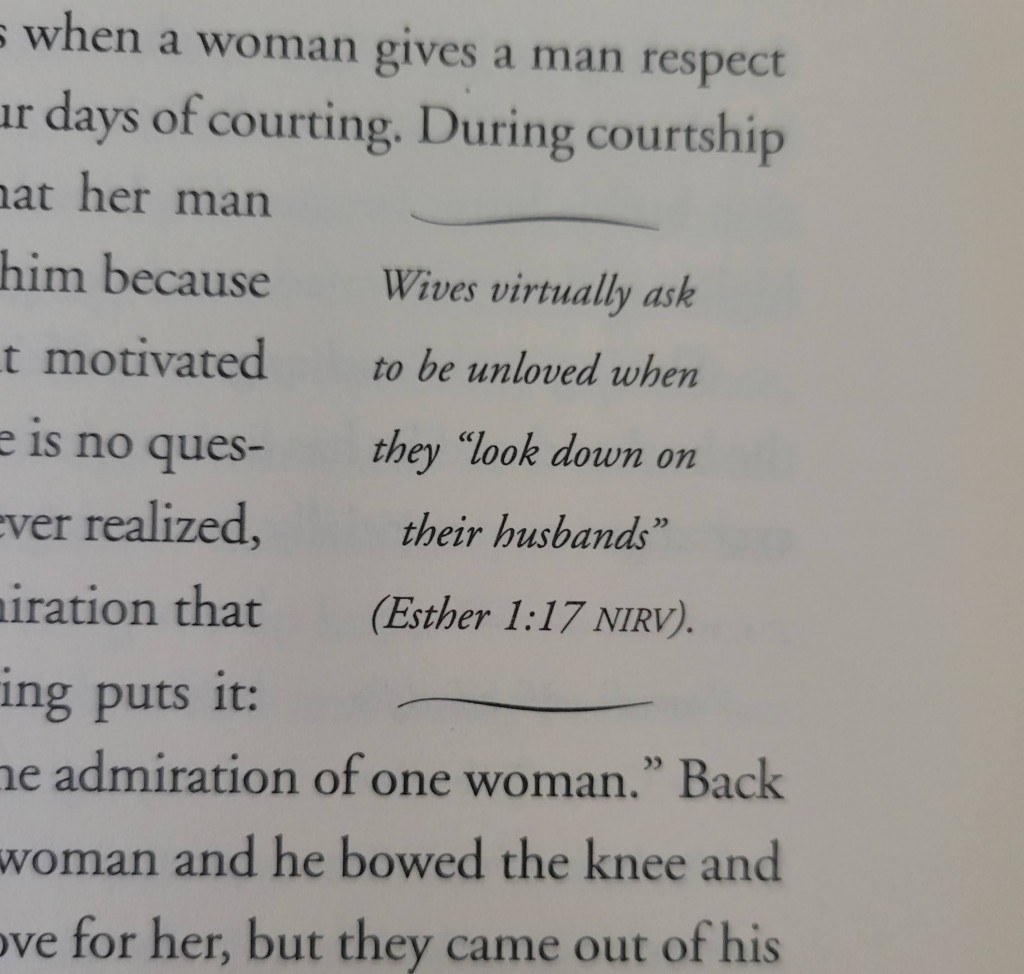 From my notes that I took as I read the book, I compiled a list that contains many more examples of the author’s use of proof-texting in order to present his concepts as Biblical truth, but I believe I have shared enough already to make my point.

Even if I agree with much of what an author says, I am not okay with that author leading people to believe that his theories are Biblical truth when what he has actually done is to manipulate the scripture in order to make his points.

The disastrous result of laying an impossible burden on people and claiming it is the “Biblical way” is illustrated by this heartbreaking comment I received from a lady named Wendy:
“Coming from someone who lived in an emotionally abusive marriage for over 16 years, this book encouraged my husband’s abuse and only made me feel that apart from perfection I was to blame for the abuse I was suffering…I can tell you the damage is huge to a spouse who has a heart for God and is in a marriage with a narcissist. Perfection wouldn’t have been enough. I was on one of the love and respect podcasts anonymously and was praised for my effort to continue to respect in spite of obvious abuse. Mr. Eggerich stated that if my husband didn’t change…I was to suffer for Jesus and continue to give and respect. 16 years later I found out my husband was living a double life of homosexuality, porn addiction, adultery with both women and men, and I was told he was a covert narcissist. My life was endangered, my children were in danger…if you are in a marriage with an abusive person…this book will only enable their behavior…I am grateful I am alive and my children are safe, but it was not without consequences.”

I am not okay with what happened to Wendy in the name of the “Biblical principles” taught in this book.

I am not okay with someone using scripture out of context to convince women it is their responsibility to motivate their husbands to love them.

I am not okay with an author telling women that if their husbands don’t love them it is because they “asked for it.”

I am not okay with an author telling a woman that if her husband mistreats her, she can just respect him more and it will make him love her.

That is my reason for this series. Too many people are suffering as the result of being encouraged by their pastors or counselors to read this book. It is promoted as Biblical and something that will revolutionize a marriage. And yet, it is not Biblical, and the only revolutionary change it has brought to many people’s lives is destruction.

Love & Respect is a best-selling book. Out of 33 million titles on Amazon, it ranks as of this writing at number 1,726. There is no telling how many thousands of people have read it and been harmed by their desire to obey what they were told was Biblical truth.

You can find the list of other problems with Love & Respect here. I hope you will pass this information on to others whom I hope will be spared from living a story like Wendy’s.

Why is Marriage So Hard?

Love & Respect is Based on Illogical Assumptions about Gender