Oh Be Careful Little Mouth What You (Don’t) Say

My college friends and I all sat in the van outside of the restaurant, chowing down on our fast food.

“I'll be right back,” the leader of our group said as he jumped out of the van and strode back inside the restaurant.

When he returned with a big smile on his face he told us what he'd been doing.

“I just had to go back in and tell them what a good job they did serving us and how good the food tasted,” he said.  “The manager was pretty shocked since most people that come marching back inside asking to speak to a manager aren't saying anything nice.”

I don't know what to say so I just won't say anything,” I thought to myself.

Later I felt terrible when I overheard her telling someone about a major trial she was going through.

When she needed encouragement the most I had walked right on by without even saying a word to her.

When we read verses about the tongue or hear messages preached about our speech we usually think about the danger that comes from speaking too much.  The more we say the more opportunities we have to get ourselves into trouble with our words.  That is definitely true and entirely Biblical.

But I think those of us who tend to be more on the quiet side think we're automatically off the hook.  Because it's safer to use fewer words, we tend to let ourselves glide through life not saying anything ever – including the times when there is something that really should be said. 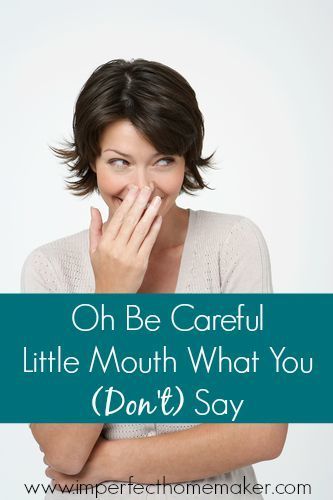 As I opened up the Bible and searched for Scriptures about the times when we should open our mouths, I was not surprised to find that there must be a healthy balance between the two extremes (speaking too much and speaking too little.)  Balance is something that scripture teaches in every area of life.

So for those of us who are a little on the shy side and prone to use that as an excuse not to speak up, here are some verses that push us a little closer to the balance that we need:

Proverbs 15:23  A man hath joy by the answer of his mouth: and a word spoken in due season, how good is it!

Proverbs 25:11  A word fitly spoken is like apples of gold in pictures of silver.

Isaiah 50:4  The Lord GOD hath given me the tongue of the learned, that I should know how to speak a word in season to him that is weary:

Ephesians 4:29  Let no corrupt communication proceed out of your mouth, but that which is good to the use of edifying, that it may minister grace unto the hearers.

Hebrews 3:13  But exhort one another daily, while it is called To day; lest any of you be hardened through the deceitfulness of sin.

Hebrews 10:25  Not forsaking the assembling of ourselves together, as the manner of some is; but exhorting one another: and so much the more, as ye see the day approaching.

It's clear that Scripture not only encourages, but outright commands the use of our tongues to speak refreshing and edifying words to others.

It's not enough to tell ourselves we should use those types of words if we're going to speak; we must make the choice to speak them.

We never know what type of discouragement another person is facing.

The fast food manager might have a child in the hospital and an encouraging word might brighten her day more than you'll ever know.

The teenager you pass might be listening to the lies from bullies at school that he is “no good”, and without your life-giving words he will continue to believe them.

Your pastor might be discouraged because everyone wants to put their two cents in about what he could do better but no one bothers to thank him for pouring into their lives day after day.

I understand that sometimes it's hard for an introvert to know what to say, but something is better than nothing as long as you're trying.  Even something as simple as a genuine “How are you?” is better than passing someone by without a word.  They don't have any idea that inside you're thinking “I wonder if she's doing okay.  I sure would like to be friends.  Her dress is beautiful.  I wish I could stop and chat; I just don't know what to say.”  All they know is that you didn't care about them enough to speak a single word.


When someone is already discouraged, lonely, depressed, sad, or hopeless and we do not speak the words that will lift them from their despair, we are guilty of leaving them there in that pit.

So let's push ourselves outside of our comfort zone a bit, shall we?  Before we point fingers at those who struggle with opening their mouth a little too much, let's overcome our own struggle with leaving ours closed too often.

I'm not promising that it will be easy, but I'm encouraging you to be obedient anyway while remembering that “I can do all things through Christ which strengtheneth me.”  (Philippians 4:13)

Will you break your silence?

When You Sacrifice the Present for a Future Dream

Dear Christian Teens: Do you Know the Truth About Purity?

How I Began My Journey from Overwhelmed to Rested